Thank you for your patience while we retrieve your images.

The 1968 Miami Pop Festival was scheduled for 2 days: Saturday May 18 and Sunday May 19, 1968. The event was rained out on Sunday, and this fact inspired Hendrix to write Rainy Day, Dream Away that very day.

The day before, Saturday, was dry and sunny and I was lucky enough to be there when Hendrix, Redding and Mitchell landed in the middle of Gulfstream Park in the helicopter they rented at Miami Intl Airport after realizing that Michael Lang (promoter of this event as well as of Woodstock which would occur 15 months later) had not arranged for a car to transport them to the event site.

I was unlucky enough to lose within the bureaucracy of my high school all the still photos I shot of this event, but have this 8mm film I shot with my dad's movie camera.

Michael Fairchild has assembled the history of the now rare documentary footage of this event at http://rockprophecy.com/abcmiami.html

Ken Davidoff has displayed his extensive record of the event at: http://www.themiamipopfestival.com including the 2 shots here that include me hanging out with Hendrix and company! 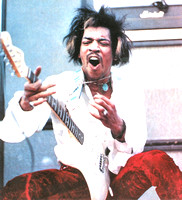 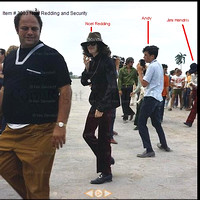 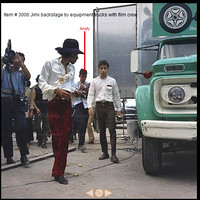